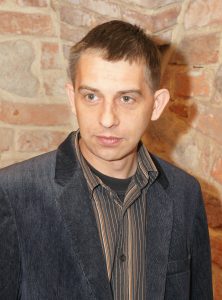 I was born in 1970 in Lublin, where I studied and defended a diploma at the IWA UMCS in 1996.. Since 2004, I belong to the Association of Polish Artists and Designers Applied Arts in Warsaw. I am associated with Tarnow, I live here and create .I presented my works at exhibitions among other things in :

Initially I painted what I saw. Later I discovered that in the matter I can detect infinity. For me art became a way to convey thoughts. I was interested in abstraction, and in particular I want to show what is usually invisible either in ordinary things, or in space. I want to extract from the chaos –the matter of cosmic structure. From the random matter they can come out also paintings like the real world – a figural abstraction or elements quite realistic. I aim to make my paintings reflection of the world of microcosm, it is the world of bacteria, atomic particles. All quantities meet in infinity and they are created by infinity. They are also important dimensions (I found five: three basic,time and light).

Initially I painted what I saw. Later I discovered that in the matter I can detect infinity. For me art became a way to convey thoughts .I was interested in abstract concepts, and in particular I want to show what is usually invisible either in ordinary things, or in space. In my works I’m trying to show the world of theoretical physics but not as literally as it is in popular science books. I try to illustrate own ideas. For example, about the „paradox of matter” represents more or less so. Quantities extend in two directions starting from a point „0”, where I placed human being. Both of these trends have no end. It is the way in quantities which are infinitely small, such as quantum, particles of atoms and in quantities which are infinitely large – distance into outer space. It is not easy to comprehend infinity (space has no end), and the theory of finite space is even more difficult to accept. It seems to me that the universe has the own end but this is the end of the universe of stars, not the end at all. So the notion of finiteness of the matter is relative.

I want to extract from the chaos –the matter of cosmic structure. From the random matter they can come out also paintings like the real world – a figurative abstraction or elements quite realistic. I aim to make my paintings reflection of the world of micro and macrocosm, it is the world of atomic particles but also at least for us the infinite depths of space. All quantities meet infinity and they are created by infinity. They are also important dimensions. I found five: three basic, time and light. Dimensions interact and have a huge impact on each other. For example, you can not build a tall building without adequate its width and depth. Height, width, depth, in turn, are associated with time and the light and then so on. Dimensions can be infinite. That is all I am trying to show in my works. My paintings reflect a different order of the multidimensional universe, abstractions are non-figural, non-geometric, lacking all too conspicuous associations. I play with the light, which is a phenomenon shaping in the form and colours of the entire human environment as seen by the human eye, no matter whether using any optical devices or other or not. I’m fascinated with unlimited space of the universe stretching unknown where without end. It is not enough to have the decoration or pure abstraction lacking thoughts or more detailed content. I am far from these easy effects of colors and Benetton’s effect. It does not interest me also geometry and figurative representation of nature. So, what I aspire? I want to achieve the impression of infinity of eternity through the use of the natural properties of the matter which are subject to the laws of chaos. I want to show the temporal structure of matter. Although I think about the cosmos but I do not paint stars, planets. I’m interested in more the phenomenon of the universe what is invisible to the average mortal, in the eternal forces acting on the matter, the original energies swirling corporeality of the matter. I aim to expand consciousness in order to cross the threshold, the next threshold of understanding. I am in favor of the theory of the finite space in the sense of finiteness of the matter, that is, the finite universe of planets. But what can I say, the phenomenon of original forces is infinite.

The content can be expressed by the use of colour and shape. It is a new verbal language. Looking at the picture you can read a new book written in this language. I’m trying to present what can not be seen or unseen world, which is included in such abstract concepts for example infinity, power, love, fear, hunger, omnipotence, phenomenon, hope etc.. Before that I based on the matter in the sense of space but now I am more interested in inwardness itself. It is a space based on a verbal abstraction. It is not only abstraction or realism but only an attempt to talk about the world, the message. I am interested in the cosmos of word because the word is the building material of the matter and the universe. I would like to use Nostradamus’s mental screens. These screens allow you to see these phenomena, to convey what I think and to save this by using colour and form I have the right to do it. The record of what I see I think is fine. I’m trying to write a book about the unity based on the language in which letters are shapes and colours. It is a kind of transposition of the word. My aim is to tell people how to identify the true – it is not fiction. I’m trying to present the truth. 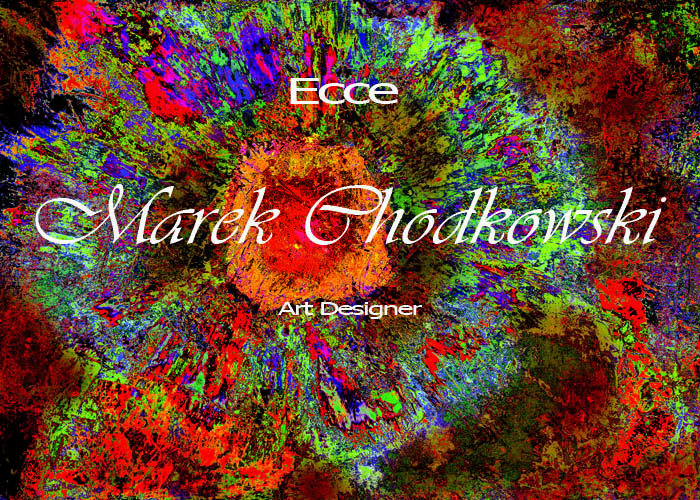